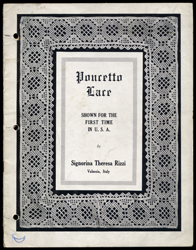 We are now seeing more than a few sites on Pinterest on Puncetto Valsesiano:
http://www.pinterest.com/search/boards/?q=puncetto

Puncetto Valsesiano belongs to the tradition of Mediterranean and Eastern European freehand knotted needlelaces such as Armenian, Bibilla, Chebka from Tunesia, Oya, and several Greek variations. This lace is native to areas in the northern Italian Piedmont, and the site http://wp.me/p12Zh8-2i contains information direct from that region. An exhibition of this lace in Fobello can be seen at http://tinyurl.com/n4rhqta.  Puncetto has a characteristically rectangular look, and was traditionally made as straight insertions to join two pieces of cloth. This rather rigid geometry is still evident when the lace is made as an edging with triangular or square peaks, and artists often make wonderful use of color. Puncetto can also be made in round motifs which can get quite elaborate, although still using rectangular elements in the different rounds. The use of the knotted stitch gives this lace a rather nubby texture, as opposed the smoother surfaces of laces using twisted buttonhole stitch variations- also part of the great Italian needlelace tradition. Technically it is worked without a marked pattern, and builds on a straight base thread or adds to the row below. It an be worked from right to left or left to right.  Puncetto uses the Continental needlelace hand position, where the tip of the needle works away from the body (as contrasted to the English position where the needle tip is drawn toward the body). A wonderful demonstration in an oft-cited video can be found at http://tinyurl.com/6bdewz.  A second, much lesser known video is available at http://tinyurl.com/4po9nn4.

Written material on this lace has always been around, but not in much volume.  There seem to have been three main periods in which this lace is publicized. The 1884 DMC Encyclopedia of Needlework mentions Italian Punto Avario briefly. The undated “Poncetto Lace” by Signorina Theresa Rizzi of Valsesia is an excellent resource. Google books is actually of help here, pointing to a US catalog of copyrights which dates either this or a similar work to 1917. In 1926 Margaret Johnstone wrote an article for the Needle and Bobbin Club called “Ragusa: The Mystery Spot in Lace-History”, in which this lace is incorrectly attributed to Ragusa. It is noteworthy that some of the collection of lace which illustrated this work was sold on Ebay a few years ago, and other pieces are in the Met.

In the 1960’s and 70’s, two unexpected sources have technical information – the Anchor Manual of Needlework (chapter 21), and the old Golden Hands publication (Part 5/Vol 1, Part 6/Vol 1, Part 36/Vol 3). Anchor was first published in 1958, although the exact origins of the chapters are obscure.  It may be a collection of earlier individual publications, but the primary purpose of the book was to sell Coats & Clark thread. The information in several chapters, such as Burano Lace, Puncetto, and Orvietto crochet is excellent, and must have been organized by authors close to the source.

Puncetto has been again documented in the past 2 decades, with several publications by Valsesian authors:

Many of these works can be purchased at Italian Needlecrafts, or from the Tombolo & Disegni site at http://tinyurl.com/4ao3kqp.

Given the increasing interest in this lace (note that is a lively Puncetto discussion group on the Needle Lace Talk form http://tinyurl.com/45waw6n)  perhaps it is a good time for someone to think about a new work on the whole category of knotted freehand needlelaces.  Perhaps OIDFA could form a study group. Or perhaps someone like Avital, with her unique geographic location, could consider it. There is a surprising amount of information on the web from local sources on the eastern knotted laces, but in languages with which the western community is unfortunately not always familiar. We should not be ignoring pieces like these videos:
http://www.youtube.com/watch?v=oW5RSHVb6uQ&feature=related
http://www.youtube.com/watch?v=NaJXDimQZTs
http://www.youtube.com/watch?v=AjNPj5iJlw8

This entry was posted in On the Internet. Bookmark the permalink.