When I first noticed the later English tokens, it was a bit hard to take them seriously. No information on them was available in lace-related literature.  They seemed mostly to be boring advertisements for various merchants, and I nearly missed a very interesting class of collectibles. My impression was largely a result of a bias toward searching out lace-related material, which leads naturally toward examples issued by lace manufacturers and sellers. Hence the more mercantile nature of the coins. It is sometimes hard for the lace collector to remember that lace was not only designed and made, but also made up into a salable form and marketed.
Much research remains to be done as to the specific purpose of these coins, whether they were used for currency, trade, or advertising. Dates are also largely unknown, although they could likely be revealed by a careful search of existing coin catalogs. Shown below are some representative examples.

The first three tokens were issued by a shop in St. Paul’s Churchyard, under different management over the years. See the excellent comment by KarlAntonMartini at the end of this post. 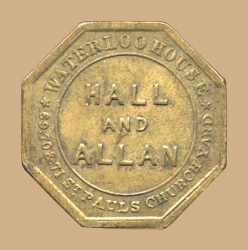 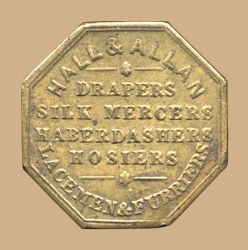 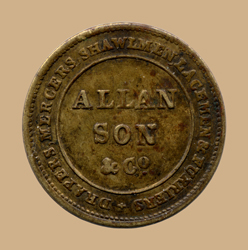 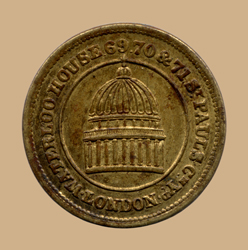 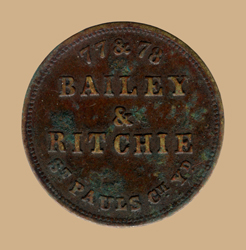 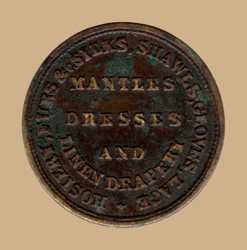 A pictorial advertising token is from Falkner Brothers. The building depicted is probably their storefront. 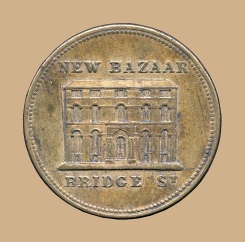 Another pictorial advertising token is from T. Seaber, Birmingham. 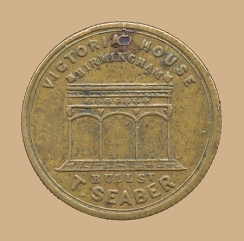 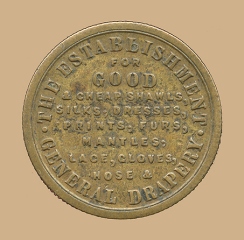 The next token is probably as close as we can come to a true 19th century ‘trade’ token. ‘Lace dresser’ was a common occupation in the machine made lace industry, indicating one who bleached, starched and stretched the lace as it came off the machine. The dresser also separated the lace into bands of various widths by pulling out a dividing marker thread and cutting along the trace. They then finished and packaged the result for sale. I’ve seen examples of this token with different numbers on the back, so I’m not sure what they mean. 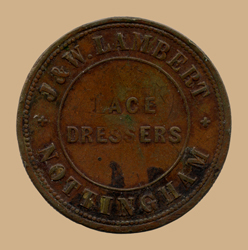 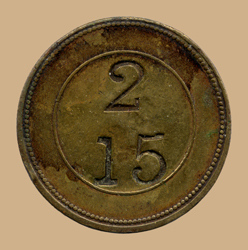 The next three examples are from Brighton, and both show the Royal Chain Pier on the reverse. 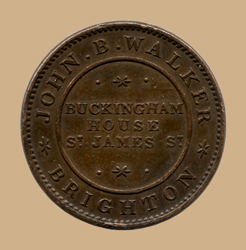 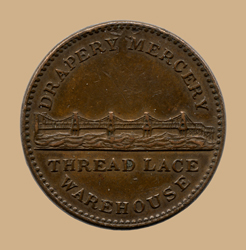 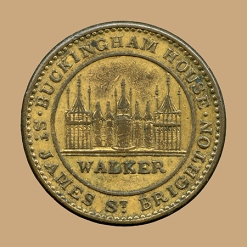 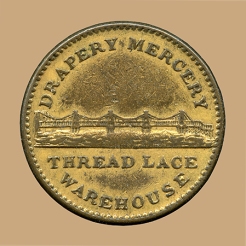 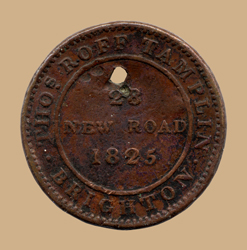 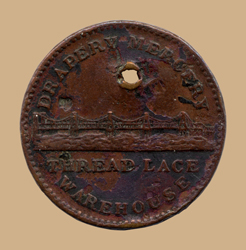 Thos Roff Tamplin, 28 New Road, Brighton.  1825 date?
2.74 centimeters diameter, 7.4 grams
Drapery, Mercery, Thread Lace, Warehouse
This is obviously the same reverse as the previous coin. There must be a great story about the pierced hole.

So there remain questions about the 19th Century tokens:
– What are the exact dates of issuance?
– What are they made of? Some look copper, some brass, some guilded.
– Why were they issued – advertisement, trade, small currency? How were they valued? We occasionally find mention of lace tokens given to lacemakers in exchange for work or as a substitute for small legal change – and tend to take this as obvious exploitation. But our view can be highly biased seen in the light of our own 21st century circumstances. Careful research is needed to search out and document the original settings, underlying reasoning and actual economic effects to understand this specific element of history. Perhaps it was a system that worked well, perhaps not. We mustn’t judge without the facts on all sides. All in all, it’s an excellent subject for a student.