On the Internet: Tunisian Chebka Lace 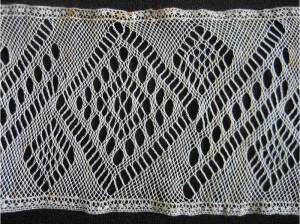 3″ wide insertion of a typical Chebka diamond pattern from my collection. Probably made for the European market.
A very beautiful example combined with ‘Venise’ rosettes as described in the “Dentelles & Broderies Tunisiennes” book can be seen at http://textilecollection.wisc.edu/featured_collections.html. The design is similar to the work of Mlle M. Djellab shown at the bottom of page 36.

The Tunisian Republic is the northernmost country in Africa, and is also part of the five closely related Maghreb countries (Tunisia, Morocco, Libya, Algeria, Mauritania – also the disputed Western Sahara territory). Parts of these countries are separated from Africa by the Atlas Mountains and the Sahara, which promoted close contact with Mediterranean countries, particularly Italy, France, Malta, Sicily and Andalusia. Modern Tunisia was part of the Turkish Ottoman empire until it passed to a French protectorate in 1881. It became independent in 1956. In the face of violent protests stemming from the self-immolation of Mohamed Bouazizi on December 16, 2010, the government of Tunisia was dissolved on January 14, 2011 in what the media is now calling the Jasmine Revolution. Longtime president Zine El Abidine Ben Ali fled the country. The example of this one small nation (where women enjoy unprecedented rights among traditional Muslims), has shaken the entire world.

Chebka is a knotted freehand needlelace that was traditionally used for insertions to join together two pieces of cloth, although I am unable to find any working instructions on how this was accomplished. Similar to freehand bobbinlaces, it was traditionally worked without a marked pattern. This lace had several names depending on where it was produced. Chebka seems common to the cities of Tunis and Carthage, while the heavier Géma was made in Bizerte.  There is a town called Chebka in Tunisia, but I cannot find a connection with the name of the lace. ‘Algerian’ and ‘Moroccan’ lace are terms occasionally used and may indicate the spread of this technique in neighboring countries, or perhaps they are just commercial names. The name ‘Arab’ lace was invented for the European market.

The art was not very robust when the French arrived, and several factions saw an opportunity for a revival. The lace changed both in character and in working methodology in response to European retail demand for a lighter, more flexible product. A finer cotton thread was introduced. Working methods evolved to use the stiff needlelace support composed of paper backed with layers of cloth. Workers used both long, narrow backings for the traditional insertion style (still with no marked design), and a larger square support for the newer complex patterns (where designs could be marked). The needlelace pillow seems to have been introduced to help speed production by allowing both hands to work freely. New designs breaking away from the straight insertion mode allowed the production of deep scallops, the development of backgrounds, and inclusion of knotted rosette motifs (‘Venise’) similar to Reticella.

Chebka is generally considered a single knot lace often with long spaces between knots. Much is made in technical descriptions of the Mediterranean laces in terms of single or double knots – I won’t go into detail here. Take a look at this interesting article http://textilecollection.wisc.edu/featured_textile_articles/oya.html to get some idea of the confusion over this matter. Again (see my Puncetto article) I repeat my call for someone to write the definitive work on Mediterranean and Eastern knotted laces, with solid, defensible research using all the formal textile technology methodology we can muster. 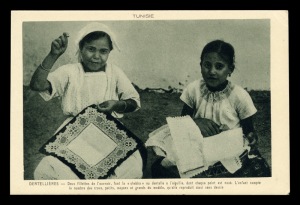 Above are three images on postcards, and one image of students seated at their needlelace pillows (taken from the Dentelles & Broideries Tunisiennes book discussed below). The postcards were produced by the Sœurs Missionnaires de Notre Dame d’Afrique – who come up repeatedly in African missionary lace-training efforts. They seem to have run a school for this lace associated with the Maison Lavigere in Carthage. This institution was named after Cardinal Charles Martial Allemand Lavigerie, founder of Catholic orders in Africa.
I am confused by the highly staged lefthand image in the second row (and more than a little uncomfortable with the offensive imagery). The lace seems to be Chebka, but the students don’t seem to be Tunisian.

Published literature is quite scarce on this lace. Thérèse de Dillmont in ‘The Complete Encyclopedia of Needlework’, describes Chebka lace technique, also under the name Arab Lace. The book was published (in French) in 1884, but I think this and the Puncetto sections was added in a later edition – I’ll try to track the exact date. The description is confined to insertions with a little scalloped edgework – there is no mention of working this lace on a pillow. It is described as a ‘looped’ thread lace with single knots. It is notable that Dillmont describes Puncetto lace technique using the ‘Continental’ needlelace hand position which draws the needle tip away from the body. Chebka is shown (and this is reflected in the other works discussed below) using the ‘English’ position which draws the needle tip toward the body.

The Cartier-Bresson manual shown below was written by the Sœurs Missionnaires de Notre Dame d’Afrique, and is a good, basic technical manual. I can’t find a publication date. 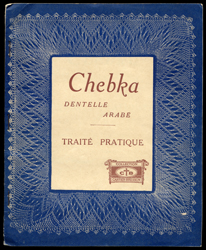 Click here to read Chebka. Set your web browser to ‘fit page’, and use the ‘Page Up’, and ‘Page Down’ keys on your keyboard for most effective viewing. Be patient, it takes a while to download.

The work shown below was written probably by the ‘A. Delplanche’ editor, and is an excellent historical resource. The author seems to have been one of those stimulating the resurgence of this lace in the first decade of the 20th century.  Although technical instruction is minimal, the products of several designers and manufacturers are shown.

Click here to read Dentelles & Broderies Tunisiennes. This paperback book is quite rare and is 65 pages long, but only 41 of them concern lace. So for the moment, that’s all I’ve scanned in. A few of the rest of the photos show lace combined with embroidery, but my scanning hand is tired and my copy of this work is fragile.
Again, it’s a big file so be patient.

A third publication is “Dentelles Algériennes & Marocaines”, by Prosper Ricard, printed in 1928. The lace described is definitely Chebka-type, and I haven’t read enough of this book to discern the subtilties of Algerian and Moroccan variations, if there are any. It has 45 pages of text and 44 pages of plates. I need to think how to scan this since it is a little too wide for my scanner.  More on this work will come later. 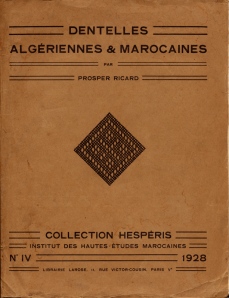 The Autumn, 1956 issue of Embroidery (the English journal of the Embroiderers’ Guild) has an article by Rachel Kay-Shuttleworth on this type of lace. I’m not sure I buy her argument about the similarities of this lace and Hollie point. Click Kay-Shuttleworth to download the article.

There is also some technical instruction in the March 1989 issue of “La Dentelle”, from the Centre d’Initiation a la Dentelle du Puy.

Lace Fairy has posted an excellent piece from a very unique source, Monique Barns, who was born in Tunisia.
http://lace.lacefairy.com/Lace/ID/TunisianLace.html

I have yet to find any online videos discussing or demonstrating this lace.

The craft of Chebka lace  has not gone unnoticed by Tunisian artists. On July 21, 1980, Tunisa issued two stamps honoring handicrafts (Chebka lace and metalwork). Artist Safia Farhat, who is connected with several Tunisian stamps, drew the design. This is one of the most beautiful of all the lace-related postage stamps.
The image of a seated lacemaker working at her Chebka pillow is very appealing, and the prominent Tunisian artist Abdelaziz Gorgi (1928-2008) produced the righthand image shown above. Note the two different orientations of the pillow in these images, which may be artistic license, or may be repositioning of the work to follow a desired pattern. Both artists show quite a fascination with hand position, which may exaggerate reality, but only slightly.

This entry was posted in On the Internet. Bookmark the permalink.

4 Responses to On the Internet: Tunisian Chebka Lace