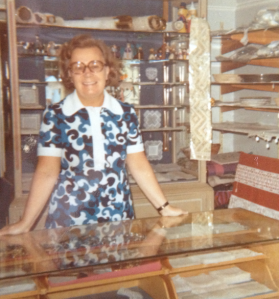 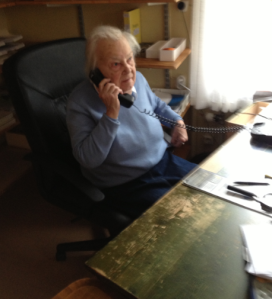 Gunnel Landtblom, proprietor of Elsa Petersons Spetsaffär Eftr., located in Vadstena, Sweden, died last month at the age of 93.  Her’s is a distinguished family in Swedish bobbinlace. Surrounded by lacemaking relatives, Gunnel’s mother, Elsa Peterson (1891-1980), started the business in 1920.  She operated as a “spetsförläggare”, which is the role of the middleman between the lacemaker and ultimate seller.  Patterns would be disseminated to lacemakers working from home, and the finished pieces collected, paid for, and ultimately sold in the shop.  Originally located at the family home at Skänningegatan 11, Vadstena, the shop moved to Storgatan 23 in 1960, where it remains today.  It is the oldest business of its type in Sweden, the repository of invaluable history and memories. 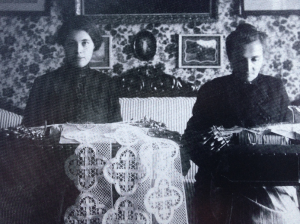 Ruth and Emma Pettersson, Elsa Peterson’s sister-in-law and mother-in-law at their lace pillows. 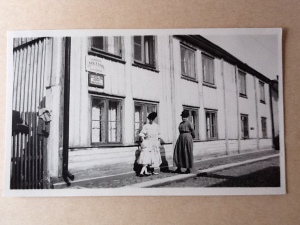 Elsa Peterson and her first shop at Skänningegatan 11.

Gunnel was born on October 6, 1923 to Elsa and Gunnar Peterson. Ever a student of the Humanities, her interests lay in art, literature, history, music and languages. After graduating high school, Gunnel studied English, American, French and Spanish at the University of Uppsala. During this time she also studied French one semester in Lausanne and one semester in Paris. 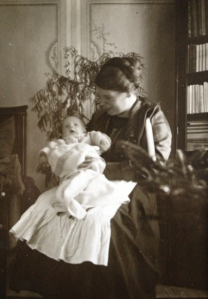 Gunnel took over the shop in 1971 when her mother retired.  Of the hundreds of lacemakers in the area, about one hundred worked with the shop. But these numbers declined through the years. Eventually Gunnel shifted her emphasis from selling lace to the revival of traditional Vadstena patterns. Some had been designed in the Art Deco style by her father’s cousin Inez Pettersson, and many were new designs. The fame of her shop steadily grew, attracting local, international, even royal visitors. All were eager to hear to story of Vadstena lace from its famous adherent. 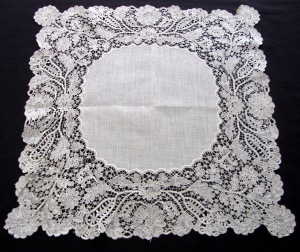 Gunnel was actively involved in the shop until January 5th of this year. As illness crept upon her, she hoped to get better and return to work in the shop located on the ground floor of her home. But it was not to be.  With her goes a critical part of lacemaking history, yet still kept alive through her tireless efforts.

In March of 2016, Gunnel received a special award from the City of Vadstena. The certificate reads:

Special Appreciation for Outstanding Achievements in the Art of Bobbin Lacemaking

Throughout her life, Gunnel Landtblom has maintained and developed the art of bobbin lacemaking in Vadstena. Like her mother Elsa Peterson, Gunnel is a carrier of the family´s artistic lifework. Without their efforts the art of bobbin lacemaking would probably have been forgotten long ago. Gunnel Landtblom has helped maintain and retain Vadstena´s position as a node of culture not only in Sweden but also internationally. Her tireless efforts have increased the recognition of Vadstena’s cultural heritage. Vadstena especially wants to recognize and thank her for outstanding achievements in the art of bobbin lacemaking.
Signed by:
The Chairman of Vadstena Municipality
The Board of the Vadstena Municipality
The chair of the Culture and Education Committee

Deepest thanks to Gunnel’s daughter, Karin Landtblom, for her help in writing this memorial.
The annual Vadstena Lace day will be on July 1, 2016, and a separate post will be done on that event.

This entry was posted in In Memorium. Bookmark the permalink.