What better way to recognize the bobbin lacemakers of Northeastern Brazil than to sing the famous song “Olé, Mulher Rendeira” at the Olympic closing ceremonies in Rio last night. Lace designs played on the floor in lights, and a lacemaker stood at her pillow in the center of the patterns.  It was in the part of the show acknowledging Brazil’s history of slavery and Portuguese colonization. Renda di Bilros came directly from Portugal (where it is still widely practiced), and the site http://tinyurl.com/hbzfdje discusses ties with slavery.

There is an excellent discussion of the song at http://tinyurl.com/zp6c3kn. To quote from that site:

“The song is ascribed to the cangaceiro Lampião in honor of his lacemaker grandmother Tia Jacosa (written in 1922). The cangaceiros were “social bandits” from the drought and poverty stricken north-east of Brazil in the late 19th/early 20th century who made a living by looting local landowners, taking hostages and raiding ranches. While they inspired either terror or a sort of mythic awe in the local population, the bandits, and in particular Lampião, became a thorn in the side of Brazilian national forces. While they tried to foster the image of a united, peaceful and “civilized” society the apparent lawlessness of the wild sertão backlands contradicted this notion of a modern, unified state. The sertão was a long way from Rio de Janeiro and São Paolo in the early 20th century.” 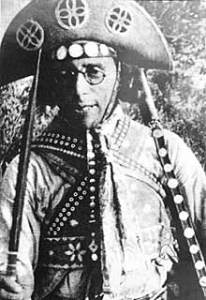 The song itself is widely sung in Brazil and often danced to by children with their lace pillows:  http://tinyurl.com/jr6myam (my absolute favorite is http://tinyurl.com/js6g6t3).  The traditional bobbin is made from a long stick with a palm nut at the end for a weight, although this has largely been replaced by heavy wooden bobbins – there are many YouTube videos of Brazilian lacemakers: http://tinyurl.com/zo9t6ky (here is my favorite, http://tinyurl.com/h693bwt – what to do with all your leftover cable spools).  The lace tends to be highly colored, and we often see these products in New Mexico.
Here is a wonderful video of a lacemaker, Dona Olinda, singing Olé, Mulher Rendeira as she works at her pillow http://tinyurl.com/jdxq7gq. She also describes some of the traditional equipment, including the palm nut bobbin, cactus thorn pins, and banana leaf-stuffed pillow.

There are several versions of the lyrics, and translations into English are rare. Here’s one version:

My take on the refrain in  English is:

The rest of the song is more or less along the lines of:
Lampião came down from the mountain
He gave a ball in Cajazeiras
The young maidens
Sang “Mulher Rendeira”

Then something like:
The beautiful village girls
are no longer occupied with work
See who is in the window
Flirting with Lampião

Another version of the song has a line:
Aqui vem Lampião , amando, gozando e querendo bem.

This entry was posted in Music. Bookmark the permalink.