This banknote is of interest to lace collectors due to the wonderful engraving of a lacemaker at work on the reverse. The front shows a portrait of the Belgian King Albert I (1875-1934, reigned 1909-1934), and Queen Elisabeth (1876-1965), along with a watermark of the king’s profile. Even though King Albert died in a mountaineering accident in 1934, his portrait continued to be used until the end of WWII. 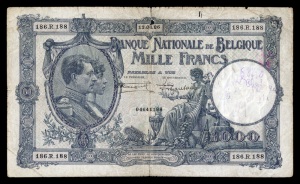 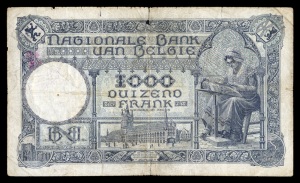 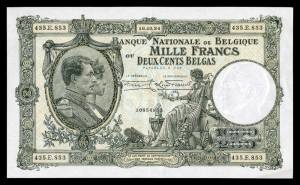 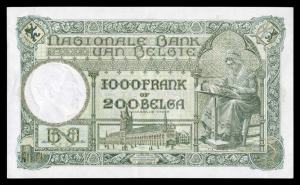 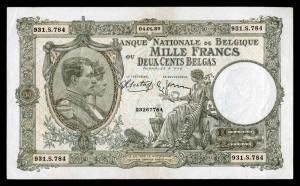 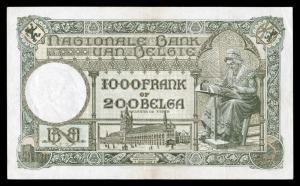 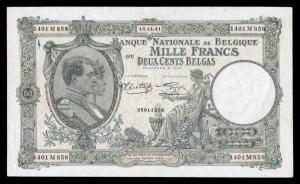 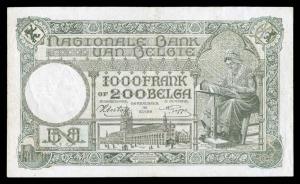 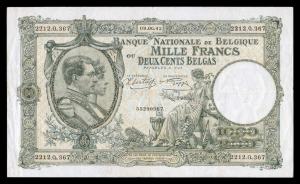 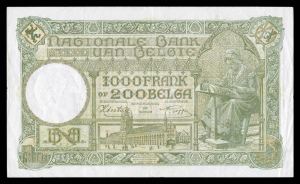 This history of currency values during this time is complex, and covers a critical period from the aftermath of WWI through WWII. France and Belgium needed funds to rebuild following the devastation of WWI, funds which were expected from Germany, but slow in coming (one of the many factors contributing worldwide to the Great Depression). In 1926, these countries experienced depreciation and an abrupt collapse of confidence, leading to the introduction of a new gold standard currency for international transactions. A new unit called the ‘belga’ was introduced, worth 5 francs. The belga was tied to the British pound at a rate of 35 belgas (175 francs) = 1 pound and was thus put on a gold standard of 1 belga = 209.211 mg fine gold (13.9 cents in 1927 or $8.24 in 2010 dollars).

Below is a graph of belga values in dollars for this period, along with an estimate for what it would have been worth in 1945 if the belgia were still around. I also added two points for 1940/41. Values are taken from  http://www.measuringworth.com/datasets/exchangeglobal/. I leave it to the reader to convert these numbers into today’s equivalent currencies.

For today’s collector, uncirculated examples of this note can go as high as 100 euros.  One can find a wide range of lower prices depending on condition.

The dubiously redoubtable Franklin Mint managed to cash in on this note, including it in their 1983 collection of fifty “World’s Greatest Bank Notes”… reproduced in sterling silver, albeit somewhat reduced in size. 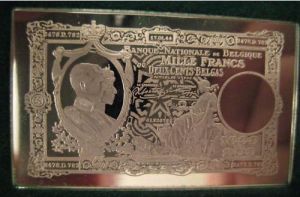